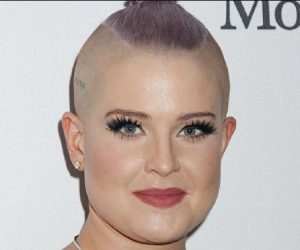 Kelly is alive and kicking and is currently 37 years old.
Please ignore rumors and hoaxes.
If you have any unfortunate news that this page should be update with, please let us know using this .

Does Kelly Osbourne Have the coronavirus?

Kelly Osbourne's father, Ozzy Osbourne, is still alive and kicking at the age of 73. He is British and has had a career as a musician.

Kelly Osbourne's mother, Sharon Osbourne, is still alive and kicking at the age of 69. She is English and has had a career as a tv personality.

Kelly Lee Osbourne is a British singer-songwriter, actress, television presenter and fashion designer. The daughter of Ozzy and Sharon Osbourne, she is known for her appearances on The Osbournes with her family, for which they won a 2002 Emmy Award for Outstanding Reality Program, as well as on E!'s Fashion Police, where she was a presenter from 2010 to 2015. She has also appeared on Dancing with the Stars, in which she and her professional dance partner Louis van Amstel took third place. She is the voice of Hildy Gloom in the Disney XD animated series The 7D. She is also a judge on both Australia's Got Talent and Project Runway Junior.
Osbourne and the rest of her family (without Aimee) chose the vicissitudes of public life with the MTV reality show The Osbournes, which aired from 2002 to 2005. The series chronicled their day-to-day life, portraying a dysfunctional family in which metal music, profanity and other harshness were a daily part of life. Kelly, the middle child, emerged (according to Rolling Stone) as "a wickedly funny, brutally honest, pint-size, potty-mouthed spitfire." The series started when she was seventeen, and ended when she was twenty. Kelly said in an interview for The Osbournes DVD that the crew were only actually supposed to be there for a few weeks but ended up staying for a few months and that the constant cameras focusing on her and her family was stressful. In 2002, during the second season of The Osbournes, Kelly dated The Used lead singer Bert McCracken. The show was filmed in California, where the family has had their residence for several decades.

Her debut album, Shut Up, was released by Epic Records in 2002 to moderate American sales, but good European sales. The lead single, a cover of Madonna's "Papa Don't Preach", debuted with Houston rock band Pure Rubbish at the 2002 MTV Film Awards. The album, which debuted at No. 1 on Billboard's Heatseekers chart, was met with mixed critical reviews and, by May 2003, Osbourne was dropped from Epic Records. By autumn she was on the Sanctuary label, later recording a duet of "Changes" (a Black Sabbath song) with her father. The duet hit No. 1 on the UK charts and resulted in a reissue of Shut Up, titled Changes. "Changes" was one of a few tracks to have fallen down the charts (from 1–3) whilst selling more copies than the week it reached number 1. Osbourne was the first artist to top all three of the Billboard charts dance surveys in the same week with the "Chris Cox Club Remix" of "One Word".
Her second album Sleeping in the Nothing was not without controversy, due to its reportedly heavily altered album cover, in which Osbourne appeared slimmer, despite her previous assertions of being happy with her size.