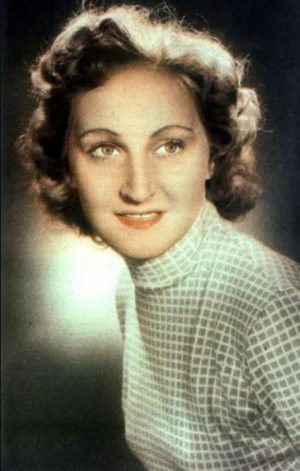 Kirsten passed away on April 10, 2000 at the age of 71 in Copenhagen, Denmark. Kirsten's cause of death was breast cancer.

Kirsten Rolffes (20 September 1928 – 10 April 2000 in Copenhagen) was a Danish actress, internationally mostly recognized for her role in The Kingdom and Matador. She also had a leading role in Denmarks first sitcom entitled "Een store familie" ("One big family", which took place in a typical early 80s office building belonging to a company which produced make-up, deodorants, etc. Her role was that of an elderly office worker with little interest in modern ways. Her role in the country's first proper soap opera, "Landsbyen" ("The Village") further cemented her fame in her own country. She also worked very much in animation - amongst others she voiced Ursula in the Danish dub of Disney's The Little Mermaid, Maleficent in the Danish dub of Disney's Sleeping Beauty, and the Evil Queen in the Danish dub of Disney's Snow White and the Seven Dwarves.