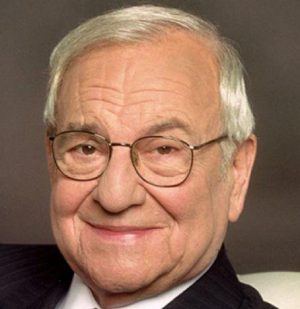 Lee passed away on July 2, 2019 at the age of 94 in Bel Air, Los Angeles, California, United States. Lee's cause of death was complications of Parkinson's disease.

Lido Anthony "Lee" Iacocca is an American automobile executive best known for spearheading the development of Ford Mustang and Pinto cars, while at the Ford Motor Company in the 1960s, and then later for reviving the Chrysler Corporation as its CEO during the 1980s. He served as President and CEO of Chrysler from 1978 and additionally as chairman from 1979, until his retirement at the end of 1992.
Iacocca was born in Allentown, Pennsylvania, to Nicola Iacocca and Antonietta Perrotta, Italian immigrants (from San Marco dei Cavoti, Benevento) who had settled in Pennsylvania's steel-production belt. They operated a restaurant, Yocco's Hot Dogs. He was said to have been christened with the unusual name "Lido" because he was conceived during his parents' honeymoon in the Lido district in Venice. However, he denied this rumor in his autobiography, saying that is romantic but not true; his father went to Lido long before his marriage and was traveling with his future wife's brother.

Iacocca was married to Mary McCleary on September 29, 1956. They had two daughters: Kathryn and Lia. Mary Iacocca died on May 15, 1983 from diabetes. Both before and after her death, Iacocca became a strong advocate for better medical treatment of diabetes patients, who frequently faced debilitating and fatal complications.
Iacocca's second marriage was to Peggy Johnson. They married on April 17, 1986 but in 1987, after nineteen months, Iacocca had the marriage annulled. He married for the third time in 1991 to Darrien Earle. They were divorced three years later.