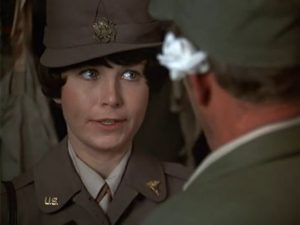 Linda Meiklejohn was born on August 9, 1943 in Los Angeles, California, USA as Linda Lee Meiklejohn. She was an actress, known for M*A*S*H (1972), Love, American Style (1969) and The Mod Squad (1968).
She played the recurring role of Lieutenant Leslie Scorch on the CBS-TV series M*A*S*H in eight episodes in Seasons 1 and 2. Linda also four episodes of Mayberry R.F.D., three in the recurring role of Hilda. Linda also made other guest appearances on such popular early 1970's TV series as That Girl, Marcus Welby, M.D., The Courtship of Eddie's Father, and Love, American Style. Linda also appeared in the Doris Day film The Ballad of Josie (1967) as well as the films My Blood Runs Cold (1966) and A Reason to Live (1985).

Her father, William Meiklejohn, was a casting director who is credited with bringing Ronald Reagan to the attention of executives at Warner Brothers studio.