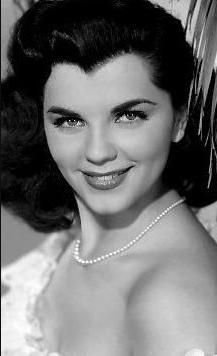 Lisa GayeActressLisa Gaye is an American retired actress, singer, and dancer.Born: March 6, 1935, Denver, COSpouse: Bently Clyde WareSiblings: Debra Paget, Teala Loring, Frank GriffinChildren: Janell WareParents: Frank H. Griffin, Margaret GriffinMovies and TV showsBiography by Hans J. WollsteinA dancer at Los Angeles' Biltmore Hotel, Lisa Gaye (née Griffin) signed with Universal-International in 1953 and played a standard leading-lady role in Drums Across the River (1954). She also did such typical '50s genre pictures as Rock Around the Clock (1956) and Shake, Rattle and Rock (1957), but was busier on television, where she appeared on The Bob Cummings Show and the popular series Death Valley Days and Perry Mason. Gaye, who is the sister of former leading ladies Debra Paget, Teala Loring and Ruell Shayne, left show business in the '60s to raise her family. She should not be confused with the later cult star of the same name.
Gaye made her first professional appearance at the age of 7. At 17, she signed a seven-year contract with Universal Studios and was enrolled in the studio's professional school for actors and actresses. She began her acting career in 1954. Her first starring role was in Drums Across the River (1954).

In 1959, she was cast as June Webster in the episode "Law West of the Pecos" of the ABC/WB western series, Colt .45, with Wayde Preston. Frank Ferguson played Judge Roy Bean, justice of the peace in Langtry, Texas. Douglas Kennedy was cast as Jay Brisco. In 1965, she was cast opposite Jesse Pearson in the episode "The Rider" of the syndicated western series, Death Valley Days. In the story line, Gaye as the widowed Faith Turner puts up a sign seeking a husband for herself and a father for her son. Pearson, as mail rider Jim Barnes, tries to help her find a suitable mate. In another Death Valley Days episode in 1968, Gaye played the gambler-turned-Sunday school-teacher Lottie Deno in the episode, "Lottie's Legacy". In the dramatization, Lottie falls in love with the Reverend Peter Green (John Clarke), who does not know the details of her past.