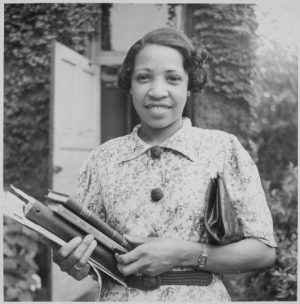 Lois Mailou Jones (November 3, 1905 – June 9, 1998) was an artist who painted and influenced others during the Harlem Renaissance and beyond, during her long teaching and artistic career. Jones was the only African-American female painter of the 1930s and 1940s to achieve fame abroad, and the earliest whose subjects extend beyond the realm of portraiture. She was born in Boston, Massachusetts and is buried on Martha's Vineyard in the Oak Bluffs Cemetery.