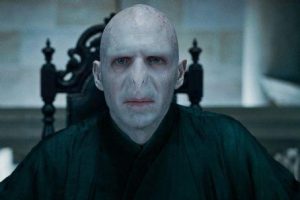 Lord Voldemort, also known as Tom Marvolo Riddle, is the incarnate of evil and sworn enemy of Harry Potter. He is feared so much in the wizarding world that he is simply known as 'You-Know-Who' or 'He-Who-Must-Not-Be-Named'. At first, his killing of Harry's parents and attempt on Harry's life seemed to be like all the other murders he committed, but as the series wears on, it is learned that his attack on the Potters was motivated through a prophecy that proclaimed Harry to be the one with the power to vanquish the Dark Lord. He has attempted to kill Harry in every part of the series except parts three and six.He is fueled by evil and possesses a mutilated soul - literally. He has a group of followers called Death Eaters who consider themselves his friends, though Lord Voldemort is emotionless beyond those of hate and anger. He is extremely arrogant and thrives on fear, however, he uses extreme caution developing his plans, and is very secretive. He is extremely similar to Adolf Hitler: both men believe in a pure race, however, neither one was a member of that race themselves. Both men killed thousands (in Hitler's case, much more), calling it "purification". Both men were at first lauded by those around them (Tom Riddle was tipped to become Minister of Magic, Hitler was well liked globally before his war crimes), then feared for their unwavering cruelty.It seems that no matter how many times Voldemort is killed, he has always found some way to return to life. It is later revealed by Hogwarts headmaster Albus Dumbledore (in Harry Potter and the Half-Blood Prince) that he accomplishes this through the use of Horcruxes, each one of which contains a part of his soul which was torn out of his body as he committed a murder. Seven of these Horcruxes exist, though Voldemort had only meant to create six. The six he created included his diary, the Peverell family ring (which contained the Resurrection Stone, one of the three Deathly Hallows), the Locket of Slytherin, the Cup of Hufflepuff, the Lost Diadem of Ravenclaw, and his snake, Nagini.He did not realize, however, that his failed attempt at killing the year-old Harry Potter had accidentally made the latter into a Horcrux. Similarly, Voldemort's resurrection in "Goblet of Fire" had made him into a Horcrux for Potter. This allowed Harry to die, destroying Voldemort's final Horcrux, and still come back to life to defeat Voldemort once and for all.In the films, Voldemort has been played by a total of 6 actors: Richard Bremmer (body only), Ian Hart (voice and motion capture), Christian Coulson (teenage Tom Riddle), Frank Dillane (second teenage Tom Riddle), Hero Fiennes Tiffin (11 year old Tom Riddle), and most prominently, Ralph Fiennes as the present day Voldemort.