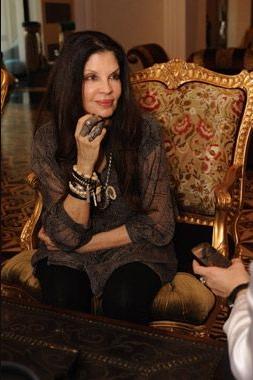 Loree is alive and kicking.
Please ignore rumors and hoaxes.
If you have any unfortunate news that this page should be update with, please let us know using this .

From W Magazine: "At 62, Rodkin has had three immensely successful careers, all by accident, and quite a few love affairs with famous men. “I slept my way to the top,” she readily admits. “Or the middle—wherever I am.” She became an interior decorator in her late 20s, when, after breaking up with musician Don Henley, she moved into the clubhouse of a posh building on Sunset Boulevard and remodeled it herself. It got the attention of real-estate tycoon Victor Drai. “Victor came to pick up a friend of mine at my apartment, and hired me on the spot to do 10 million dollars’ worth of property.” Through word of mouth she soon found herself decorating the homes of Rod Stewart, Alice Cooper, Brian Wilson, and songwriter Bernie Taupin, whom Rodkin ended up dating for five years.It was while having lunch with Drai a couple of years later that Rodkin stumbled upon her second career. Ballet dancer Alexander Godunov, who had recently defected from the USSR, was seated next to them and took a fancy to her. The two started seeing each other until Godunov’s drinking and smoking drove Rodkin to dump him, at which point he asked her, if she wouldn’t be his girlfriend, would she at least be his manager? “I’m like, ‘I’m an interior designer. What do I know?’ He goes, ‘Everyone in Hollywood.’” And so, along with Keith Addis, now a well-respected manager, Rodkin put Godunov in Witness and Die Hard. She also acquired a roster of unknowns, including Robert Downey Jr.; his then girlfriend, Sarah Jessica Parker; Judd Nelson, with whom Rodkin became romantically involved; and Brad Pitt. “Somebody sent me this kid and said, ‘You know, he’s really cute. He’s been on Dallas. But he’s not very talented.’ We got Brad Thelma & Louise and A River Runs Through It.”To stay awake at night in order to keep Downey out of trouble, Rodkin began making jewelry in 1988. “At that time, there was nothing hip on the market. It was Van Cleef, Tiffany, Cartier—old-lady jewelry. I wanted to do something high-end and rock ’n’ roll.” She designed a diamond skull ring, which the L.A. store Maxfield bought on first sight; 20 sold within a week. Elizabeth Taylor caught wind of it. “She called and was like, ‘Honey, it’s Elizabeth. I’m in my pajamas and I don’t really feel like going out right now, so could you bring some of that jewelry up here?’ So I go, and she says, ‘Honey, I look like a wreck. I have no makeup on, so would you mind sending the tray up with my maid, and I’ll talk to you on the intercom?’ And she’s lying in her bed buying jewelry and I’m at the intercom, and she’s like, ‘I want the purple one and the blue one and these big earrings.’”Cher, who is now Rodkin’s best friend, was the second person to call. “‘I want it all, b*tch,’ she told me. ‘I want whatever you’re wearing and I want more of it.’” Today her customers include Elton John, Mary-Kate and Ashley Olsen, Steven Tyler, Madonna (who announced on a radio show that all she wanted for her 50th birthday was more Loree Rodkin jewelry), and Daphne Guinness, who wears Rodkin’s signature $20,000-plus diamond-encrusted bondage rings on all five fingers of one hand. Meanwhile, she has been busy expanding her business to sunglasses, fragrance, and a capsule collection of leather jackets and gloves. And she has had two offers to option the rights to her life story: “I told them I’m still living it.”