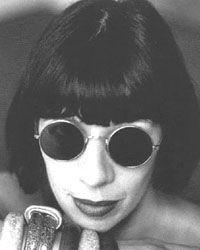 Magenta Devine (born 4 November 1957; real name Kim Taylor) is a TV presenter and journalist best known for presenting the youth travel programme Rough Guide and "Reportage" on BBC2 in the 1990s. She later presented "Young, Gifted and Broke" for ITV.
Devine originally worked for Tony Brainsby, a publicist for Queen, Thin Lizzy and Whitesnake. While still living with boyfriend Tony James, she became the music promoter for James's new band Sigue Sigue Sputnik. Her first television exposure was as a presenter of BBC Wales's pop music show Juice, produced in and around the BBC studios in Cardiff. Following her breakup with James, producer Janet Street-Porter booked Devine to be a presenter on Channel 4's youth programme Network 7. She then followed Street-Porter to BBC2 to present DEF II, of which Rough Guide was a feature before it became a separate programme.

Devine appeared on Richard & Judy in 2004, and on Extreme Celebrity Detox in 2005. She also did voice-over work, and wrote for The Guardian and The Mail on Sunday. She presented the film programme On Screen for the BBC World Service. In 2006, Devine fronted an Office of Fair Trading campaign that urged consumers in the travel market to book with a member of ABTA. In 2015, she narrated a BBC Four programme on the New Romantic movement.