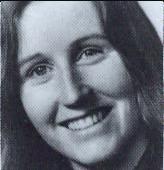 Mairead passed away on March 6, 1988 at the age of 31 in Gibraltar. Mairead's cause of death was internal haemorrhaging caused by multiple bullet wounds.