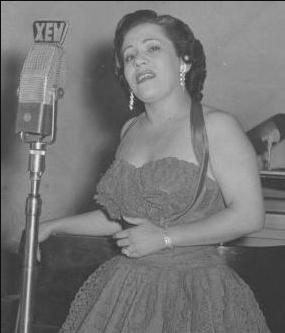 María Luisa Landín (born María Luisa Landín Rodríguez; 9 October 1921 – 20 June 2014) was a Mexican singer. She sang bolero, latin ballad and mariachi styles and was most noted for bolero. She began her career singing as a duo with her sister, but her most memorable works were as a solo singer after their duet broke up. Her 1949 interpretation of "Amor perdido" by Puerto Rican composer Pedro Flores became her signature song, is the second most-frequently played song in the history of the Mexican broadcasting and earned her the title "Queen of the Bolero". She recorded over 150 songs with RCA Records between 1939 and 1967, was a featured artist on La Voz Dominicana Television and appeared as a singer in several movies.