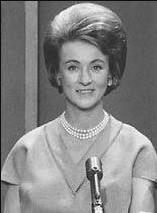 Marietta passed away on August 15, 1991 at the age of 74 in New York. Marietta's cause of death was breast cancer.

Marietta Peabody Tree (April 17, 1917 – August 15, 1991) was an American socialite and political supporter, who represented the United States on the United Nations Commission on Human Rights, appointed under the administration of John F. Kennedy.