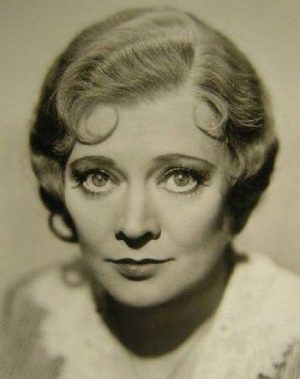 Here's a question for the most encyclopedic of film buffs: What do actresses Marjorie Rambeau and Ruth Chatterton have in common? Answer: Both rose to fame on the Broadway stage in glamorous, aristocratic leading roles, and both were once married to actor/producer Willard Mack. But while Chatterton continued to specialize in elegant, well-coiffed leading ladies in films, Rambeau was most comfortable in rowdy, rambunctious, round-the-bend, "woman-of-the-world" characterizations. Though she'd starred in a handful of silents, Rambeau's most rewarding film assignments occurred during the talkie era, by which time she'd surrendered herself to character parts. She was perfectly cast in such roles as Marie Dressler's slatternly waterfront rival in Min and Bill and the title character in Tugboat Annie Sails Again. Rambeau was twice nominated for the Academy Award for her supporting work in Primrose Path and Torch Song (1953). Marjorie Rambeau's final film was the Lon Chaney biopic Man of a Thousand Faces (1957), in which she offered a poignant portrayal as a veteran movie extra.