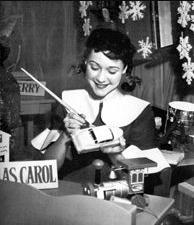 Maureen passed away on June 15, 2010 at the age of 72 in Lancaster, California, USA. Maureen's cause of death was heart failure.

Maureen Bailey was born in 1938 in Detroit, Michigan, USA. She was an actress, known for Peter Pan (1960), The Soupy Sales Show (1959) and The Jack Paar Tonight Show (1957). She died on June 15, 2010 in Lancaster, California, USA.Trivia (3)Began her career at age 3 performing on local Detroit's "Radio Schoolhouse".Wrote and recorded with Specialty Records before joining Motown in the 1960s and 1970s where she worked as an arranger and co-wrote Jermaine Jackson's hit album "Let's Get Serious".Was featured as Wendy Darling in Mary Martin's TV version of Peter Pan (1960), and also appeared with Martin in Broadway's "The Sound of Music" when she served as a replacement for the role of Liesl.