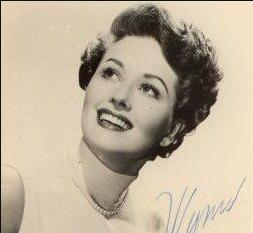 May Wynn Birthday and Date of Death

Donna Lee Hickey, better known as May Wynn, (born January 8, 1928) is an American dancer, singer, and actress.
She began performing under her birth name at New York's Copacabana nightclub at 17. She was tested for a key supporting role in From Here to Eternity, but Donna Reed played the part and won an Academy Award for her performance. In 1954, she adopted the stage name of May Wynn after she played a character of that name in The Caine Mutiny. Wynn later was cast as the lead actress in the 1956 feature films The Man Is Armed and The White Squaw, and in the Jack Webb-created NBC television series, Noah's Ark, in which she played opposite Paul Burke and Victor Rodman.

In 1959, she guest-starred on Perry Mason as Donna Sherwood in "The Case of the Glittering Goldfish".
On October 14, 1956, in Quartzsite, Arizona, she and actor Jack Kelly, whom she played opposite in They Rode West, Taming Sutton's Gal and Hong Kong Affair, wed. They divorced in 1964. She was married, secondly, to Jack W. Custer, from 1968–1979. That union also ended in divorce.