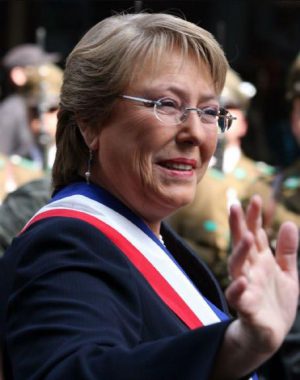 Michelle is alive and kicking and is currently 71 years old.
Please ignore rumors and hoaxes.
If you have any unfortunate news that this page should be update with, please let us know using this .

Verónica Michelle Bachelet Jeria (born 29 September 1951) is a Chilean Socialist Party politician who has served as the President of Chile since 11 March 2014. She previously served as President from 2006 to 2010, becoming the first woman in her country to do so. After leaving the presidency, she was appointed the first executive director of the newly created United Nations Entity for Gender Equality and the Empowerment of Women (UN Women). In December 2013, Bachelet was re-elected as President of Chile with over 62% of the vote, bettering the 53.5% she obtained in 2006. She is the first person since 1932 to win the presidency of Chile twice in competitive elections.