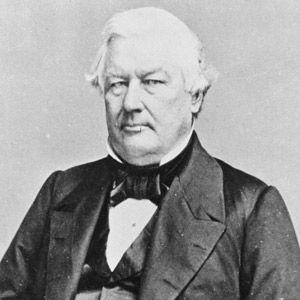 Millard Fillmore was the 13th President of the United States, the last Whig president, and the last president not to be affiliated with either the Democratic or Republican parties. Fillmore was the only Whig president who did not die in office or get expelled from the party, and Fillmore appointed the only Whig Supreme Court Justice. As Zachary Taylor's vice president, he assumed the presidency after Taylor's death. Fillmore was a lawyer from western New York state, and an early member of the Whig Party. He served in the state legislature (1829-1831), as a U.S. Representative (1833-1835, 1837-1843), and as New York State Comptroller (1848-1849). He was elected vice president of the United States in 1848 as Taylor's running mate, and served from 1849 until Taylor's death in 1850, at the height of the "Crisis of 1850" over slavery.