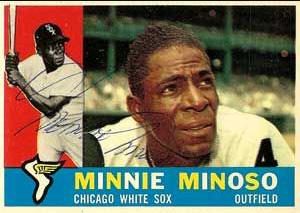 Orestes "Minnie" Miñoso (born Saturnino Orestes Armas Miñoso Arrieta, /mɨˈnoʊsoʊ/; November 29, 1922 – March 1, 2015), nicknamed "The Cuban Comet" and "Mr. White Sox", was a Cuban Negro league and Major League Baseball (MLB) player. He began his baseball career in 1946 and became an All-Star third baseman with the New York Cubans and was signed by the Cleveland Indians after the 1948 season as baseball's color line slowly fell. Miñoso went on to become an All-Star left fielder with the Indians and Chicago White Sox. The first Black Cuban in the major leagues and the first black player in White Sox history, as a 1951 rookie he was the one of the first Latin Americans to play in an MLB All-Star Game.