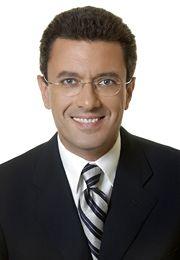 Nikos is alive and kicking and is currently 60 years old.
Please ignore rumors and hoaxes.
If you have any unfortunate news that this page should be update with, please let us know using this .

Nikos Hatzinikolaou (Greek: Νίκος Χατζηνικολάου), (born 1962 in Alexandroupoli, northern Greece), also spelled as Hatzinicolaou and Chatzinikolaou is the most famous Greek journalist and entrepreneur. He studied at Panteion University without receiving his university degree. Hadjinikolaou started early his career in journalism as a columnist for Mesimvrini daily and later Acropolis but made a name for himself on private electronic media. He was news anchor for Mega Channel from 1989 and until 2003 when he moved to Alpha TV. He was president, head of the news department and central news anchor in Alpha TV for three years. In April 2007 he became the news anchor of Alter Channel. From 1989 onwards, he hosted a weekly talk-show Enopios-Enopio (face-to-face) featuring various personalities from Greece and around the globe, including Bill Gates, Mikhail Gorbachev and Jimmy Carter.