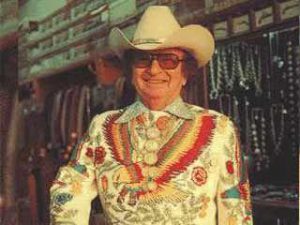 Nuta Kotlyarenko, known professionally as Nudie Cohn (December 15, 1902 – May 9, 1984), was a Ukrainian-born American tailor who designed decorative rhinestone-covered suits, known popularly as "Nudie Suits", and other elaborate outfits for some of the most famous celebrities of his era. He also became famous for his outrageous customized automobiles.