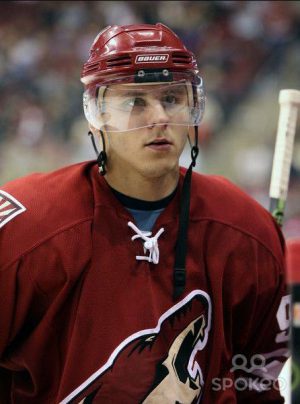 Oleg is alive and kicking and is currently 41 years old.
Please ignore rumors and hoaxes.
If you have any unfortunate news that this page should be update with, please let us know using this .

Oleg Dmitrievich Saprykin (Russian: Олег Дмитриевич Сапрыкин; born February 12, 1981) is a Russian professional ice hockey player. Saprykin is currently an unrestricted free agent who most recently played for HC Sochi of the Kontinental Hockey League (KHL), and has also played with HC Dynamo Moscow, SKA Saint Petersburg and Salavat Yulaev Ufa. He played in the 2009 KHL All-Star Game, held in Red Square and was a member of Ufa's Gagarin Cup championship team in 2011. Saprykin also played parts of seven seasons in the National Hockey League (NHL). He was a first round selection, 11th overall, of the Calgary Flames and also played for the Phoenix Coyotes and Ottawa Senators. Internationally, Saprykin has played with the Russian National Team on two occasions and was a member of the team that won the gold medal at the 2009 World Championship.