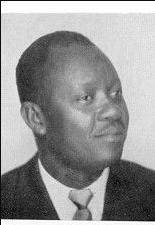 Paul Marie Indjendjet Gondjout (4 June 1912 – 1 July 1990) was a Gabonese politician and civil servant, and the father of Laure Gondjout, another prominent Gabonese politician. Gondjout was a member of the Mpongwe ethnic group, and served in the French colonial administration from 1928, and founded the Cercle amical et mutualiste des évolués de Port-Gentil in 1943. He was a delegate to the French Senate from 1949 to 1958, and founded the Gabonese Democratic Bloc (BDG). In 1954, Léon M'ba joined the party and eventually overthrew Gondjout as leader.