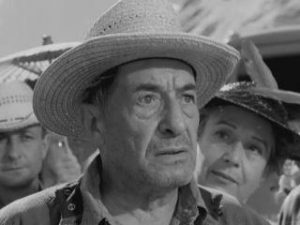 Ralph Moody (1886–1971) was an American actor with over 50 movie and over 100 television appearances. His known roles were a kindly old man & Native American, and did not start acting until in his sixties. He appeared in films such as Pick up on South Street, Toward the Unknown, The Legend of Tom Dooley, and The Story of Ruth. He was seen in several episodes of Dragnet and also appeared in episodes of The Lone Ranger, Bonanza, Perry Mason, Gunsmoke, The Rifleman, Dick Powell's Zane Grey Theater, Daniel Boone, Four Star Theater, and The Adventures of Rin Tin Tin.