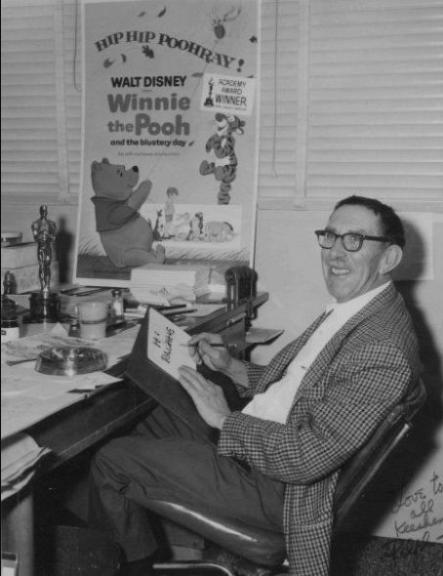 Ralph Waldo Wright (May 17, 1908 – December 31, 1983) was a Disney animator and story/storyboard writer who is best known for providing the gloomy, sullen voice of Eeyore from the popular Winnie-the-Pooh franchise. Wright came to the studio in the 1940s, and became well known throughout the ensuing decades for his endearingly gloomy and sullen personality traits as well as his bass voice. He turned out to be a natural model for Eeyore when the studio began development on Winnie the Pooh and the Honey Tree. He, along with his fellow Disney contemporaries, was a pioneer in the use of "gags" within cartoons, often acted out in front of the "story board," a bulletin board pinned with sequential sketches of the cartoon's scenes. This technique is still in use today in most major animation studios. He spent the last 30 years of his life in San Luis Obispo County in Los Osos. He died at his home in Los Osos, CA from a heart attack.