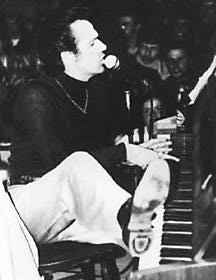 Ray passed away on November 29, 1979 at the age of 45 in Burlington, Ontario, Canada. Ray's cause of death was suicide.

Ray Smith (October 30, 1934 – November 29, 1979) was an American rockabilly musician.
Smith recorded for Vee-Jay Records, Tollie Records, Smash Records, and Sun Records during his career, and had a hit with the song "Rockin' Little Angel" in 1960 on Judd Records. "Rockin' Little Angel" took a portion of its melody from the 1844 song "Buffalo Gals". The record sold over one million copies, earning a gold disc. Smith often recorded material written by Charlie Rich, and was influenced by Elvis Presley. Smith gave a concert at "Karregat" Hall in Eindhoven on April 21, 1979. It is recorded on an album called The Rocking Side and released by a Dutch label (Rockhouse, LP 7909).

Smith committed suicide on November 29, 1979, at the age of 45. Smith's Judd and Sun singles and session material have been released on Germany's Bear Family Records.