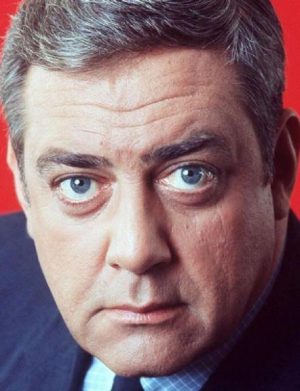 Raymond passed away on September 12, 1993 at the age of 76 in Sonoma, California, USA. Raymond's cause of death was liver cancer.

Raymond William Stacy Burr was a Canadian-American actor, primarily known for his title roles in the television dramas Perry Mason and Ironside. He was prominently involved in multiple charitable endeavors, such as working on behalf of the United Service Organizations.
Growing up during the Great Depression, Burr hoped to study acting at the Pasadena Playhouse, a renowned community theater and school in Pasadena, California, but he was unable to afford the tuition. In 1934, he joined a repertory theatre group in Toronto that toured throughout Canada, then joined another company that toured India, Australia and England. He briefly attended Long Beach Junior College and taught for a semester at San Jose Junior College, working nights as a radio actor and singer. He began his association with the Pasadena Playhouse in 1937.

Burr moved from CBS to Universal Studios, where he played the title role in the television drama Ironside, which ran on NBC from 1967 to 1975. In the pilot episode, San Francisco Chief of Detectives Robert T. Ironside is wounded by a sniper during an attempt on his life and, after his recovery, uses a wheelchair for mobility, in the first crime drama show to star a police officer with a disability. The show earned Burr six Emmy nominations—one for the pilot and five for his work in the series—and two Golden Globe nominations.
During the filming of his last Perry Mason movie in the spring of 1993, Raymond Burr fell ill. A Viacom spokesperson told the media that the illness might be related to the renal cell carcinoma (malignant kidney tumor) that Burr had removed that February. It was determined that the cancer had spread to his liver and was at that point inoperable. Burr threw several "goodbye parties" before his death on September 12, 1993, at his Sonoma County ranch near Healdsburg. He was 76 years old.