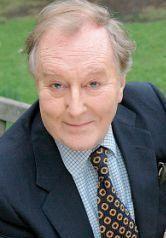 Timothy passed away on August 3, 2017 at the age of 91 in Denville Hall, Northwood, a town in the London Borough of Hillingdon, England.

Robert Hardy is legendary in his native England for his skill and versatility as an actor. As an interpreter of fictional characters and historical personages, Hardy has received critical acclaim for roles in scores of outstanding films, TV programs, and plays presented throughout the English-speaking world. British, North American, and Australian audiences may remember him best for his roles as Winston Churchill in War and Remembrance, Siegfried Farnon in All Creatures Great and Small, Arthur Brooke in Middlemarch (1994), Sir Toby Belch in Shakespeare's Twelfth Night (1981), and the Earl of Leicester in the heralded Elizabeth R (1971). But Hardy has also distinguished himself in many motion pictures, including Mrs. Dalloway (1997), Sense and Sensibility (1995), Mary Shelley's Frankenstein (1994), The Shooting Party (1984), Young Winston (1972), 10 Rillington Place (1971), and The Spy Who Came in From the Cold. Hardy brings to all of his roles an acting savvy honed to a fine edge by years of study and training at the best British institutions. Timothy Sydney Robert Hardy was born in Cheltenham, Gloucestershire, England, on October 29, 1925. At Oxford University, he studied under the great British author C.S. Lewis and graduated with honors, then joined the Shakespeare Memorial Theatre at Stratford-upon-Avon in 1949. His experience there prepared him for roles in many Shakespeare productions, including A Midsummer Night's Dream (Royal Shakespeare Company, 1959), a live-TV production of Henry V (1960), and Coriolanus (BBC, 1963). The rhetorical skills he developed in those roles served him well as a narrator or host of documentary productions such as Castle Ghosts of Ireland, Horses in Our Blood, and The Picardy Affair, about the Battle of Agincourt. His classical training has also enabled him to wear the mantle of historical personages such as Pontius Pilate in The People's Passion (1999), Prince Albert in Edward the King (1975), and Nazi foreign minister Joachim Von Ribbentrop in The Gathering Storm (1974). Hardy has a special interest in medieval history -- in particular, in the use of the longbow. Regarded as one of Britain's leading experts on that weapon, he has written a book about it, serves as a consultant on the longbow for organizations involved in history projects, and handcrafts longbows himself. Hardy, who first performed in stage plays in the late '40s, has always maintained a busy schedule. For example, between 1998 and 2001, he performed in ten film and TV productions. He is married to Sally Pearson, a costume designer.