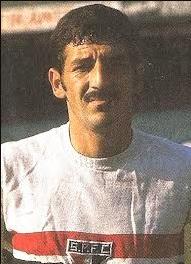 Roberto Dias Branco or simply Roberto Dias (7 January 1943 in São Paulo – 26 September 2007) was a footballer with São Paulo FC in Brazil. He was considered by Pelé to be the greatest Brazilian central defender of the 1960s and 1970s. He was known for his finesse on defense—a player who didn't need to show a rough side. He just knew how to cover and always seemed one step ahead of the forwards he covered—including Pelé. Pelé said that Roberto Dias was the only central defender who could truly mark him. In one game between Pelé's Santos FC and São Paulo FC in the 1967 edition of the Campeonato Paulista, which ended in a 3–3 draw, Dias, kept Pelé scoreless while scoring 2 goals in the process.