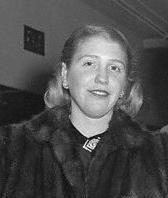 Sharman passed away on February 3, 1996 at the age of 67 in New York, NY. Sharman's cause of death was bone cancer.

Sharman Douglas was an American socialite known for her friendship with the British royal family, in particular Princess Margaret.