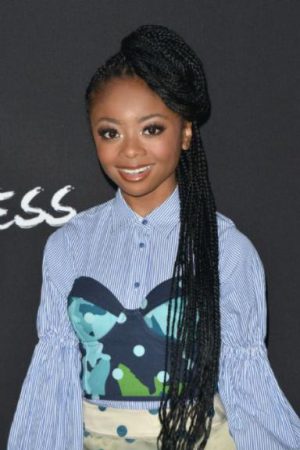 Skai is alive and kicking and is currently 20 years old.
Please ignore rumors and hoaxes.
If you have any unfortunate news that this page should be update with, please let us know using this .

Does Skai Jackson Have the coronavirus?

Skai Jackson is an American actress. She is best known for her role as Zuri Ross in the Disney Channel sitcom Jessie starring Debby Ryan and Peyton Roi List. Skai also starred in the Disney channel series Bunk'd along with Miranda May, Peyton List and Karan Brar.
Jackson was born on April 8, 2002 in New York City. She began her career as a child model appearing in numerous national commercials, including for Band-Aid bandages.

Her first major acting role was in the independent film Liberty Kid (2007), followed an episode of Rescue Me (2008) and the film The Rebound (2009). In 2009, she was cast member of the Nickelodeon pre-school animated series Bubble Guppies playing role of Little Fish. From 2010 to 2011 she guest-starred in the television series Team Umizoomi, Royal Pains, and Boardwalk Empire. She also had small roles in the 2011 films Arthur and The Smurfs.