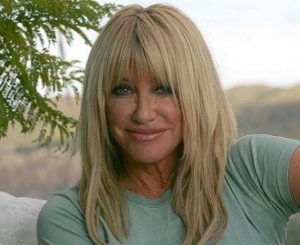 Suzanne is alive and kicking and is currently 75 years old.
Please ignore rumors and hoaxes.
If you have any unfortunate news that this page should be update with, please let us know using this .

Does Suzanne Somers Have the coronavirus?

Suzanne Somers is an American actress, author, singer, businesswoman and health spokesperson, known for her television roles as Chrissy Snow on Three's Company and as Carol Lambert on Step by Step.
She became a prize model on Anniversary Game (1969–70), where she met host Alan Hamel. They married in 1977; he had a son and daughter from a prior marriage. When Suzanne Somers found out she was pregnant with Alan's child she had an abortion because she wasn't ready to take care of a second child.

Somers was cast in the ABC sitcom Three's Company in January 1977. After actresses Suzanne Zenor and Susan Lanier did not impress producers during the first two test pilots, Somers was suggested by ABC president Fred Silverman, who had seen her on the Tonight Show and she was auditioned and hired the day before the taping of the third and final pilot officially commenced. She portrayed Chrissy Snow, a stereotypical dumb blonde, who was employed as an office secretary.
She was diagnosed with stage II breast cancer in April 2000, and had a lumpectomy to remove the cancer followed by radiation therapy, but decided to forgo chemotherapy, which doctors prescribe, in favor of a fermented mistletoe extract called Iscador.
She has been criticized for her views on some medical subjects and her advocacy of the Wiley Protocol, which has been labelled as "scientifically unproven and dangerous". Her promotion of alternative cancer treatments has received criticism from the American Cancer Society.