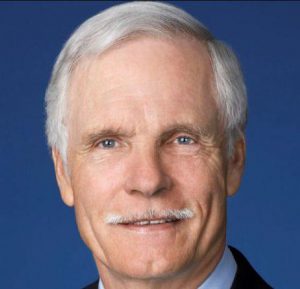 Ted is alive and kicking and is currently 83 years old.
Please ignore rumors and hoaxes.
If you have any unfortunate news that this page should be update with, please let us know using this .

Does Ted Turner Have the coronavirus?

Robert Edward "Ted" Turner III is an American media mogul and philanthropist. As a businessman, he is known as founder of the Cable News Network more popularly known as CNN, the first 24-hour cable news channel. In addition, he founded WTBS, which pioneered the superstation concept in cable television.
Turner was born on November 19, 1938 in Cincinnati, Ohio, the son of Florence (née Rooney) and Robert Edward Turner II, a billboard magnate. When he was nine, his family moved to Savannah, Georgia. He attended The McCallie School, a private boys' preparatory school in Chattanooga, Tennessee. Turner attended Brown University and was vice-president of the Brown Debating Union and captain of the sailing team. He became a member of Kappa Sigma. Turner initially majored in Classics. Turner's father wrote saying that his choice made him "appalled, even horrified", and that he "almost puked".

Turner later changed his major to Economics, but before receiving a degree, he was expelled for having a female student in his dormitory room. Turner was awarded an honorary B.A. from Brown University in November 1989 when he returned to campus to keynote the National Association of College Broadcasters second annual conference.
Turner has been married and divorced three times: to Judy Nye (1960–64), Jane Shirley Smith (1965–88), and actress Jane Fonda (1991–2001). He has five children.
In a television interview with Piers Morgan on May 3, 2012, Turner said he had four girlfriends, which he acknowledged was complicated but nonetheless easier than being married.