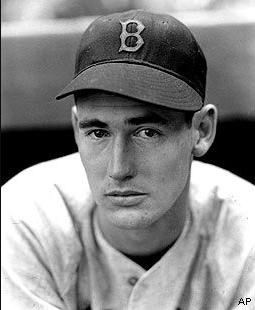 Theodore passed away on July 5, 2002 at the age of 83 in Inverness, Florida, USA. Theodore's cause of death was cardiac arrest.

Theodore Samuel "Ted" Williams (August 30, 1918 – July 5, 2002) was an American professional baseball player and manager. He played his entire 19-year Major League Baseball (MLB) career as a left fielder for the Boston Red Sox from 1939–1942 and 1946–1960. Nicknamed "The Kid", "The Splendid Splinter", "Teddy Ballgame", "The Thumper" and "The Greatest Hitter Who Ever Lived", Williams is regarded as one of the greatest hitters in baseball history.
Williams was born in San Diego on August 30, 1918, and named Theodore Samuel Williams after former President Theodore Roosevelt as well as his father, Samuel Stuart Williams. He later amended his birth certificate, removing his middle name, which he claimed originated from a maternal uncle (whose actual name was Daniel Venzor), who had been killed in World War I.

On May 4, 1944, Williams married Doris Soule, daughter of his hunting guide. Their daughter, Barbara Joyce ("Bobbi Jo"), was born on January 28, 1948, while Williams was fishing in Florida. They divorced in 1954. Williams married the socialite model Lee Howard on September 10, 1961, and they were divorced in 1967.
Williams married Dolores Wettach, a former Miss Vermont and Vogue model, in 1968. Their son John-Henry was born on August 27, 1968, followed by daughter Claudia, on October 8, 1971. They were divorced in 1972. Williams lived with Louise Kaufman for twenty years until her death in 1993. In his book, Cramer called her the love of Williams's life. After his death, her sons filed suit to recover her furniture from Williams's condominium as well as a half-interest in the condominium they claimed he gave her.
In his last years, Williams suffered from cardiomyopathy. He had a pacemaker implanted in November 2000 and he underwent open-heart surgery in January 2001. After suffering a series of strokes and congestive heart failure, he died of cardiac arrest at the age of 83 on July 5, 2002, at Citrus Memorial Hospital, Inverness, Florida, near his home in Citrus Hills, Florida.