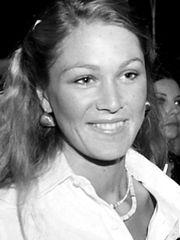 Terry passed away on March 19, 1998 at the age of 38 in Los Angeles, California, USA. Terry's cause of death was respiratory failure.

Terry McQueen's father, Steve McQueen, died on November 7, 1980 as he was 50 years old. His cause of death was heart attack after cancer surgery for malignant mesothelioma.

Terry McQueen's mother, Neile Adams, is still alive and kicking at the age of 86. She is American and has had a career as a actress.

Terry McQueen was an American socialite who was born on June 5, 1959. She is Steve McQueen's daughter. Her late father in his will, left a 1969 Porsche-911 to her in 1980. When Terry, herself, passed away in 1998, the car went to her brother, Chad McQueen (who also owns their father's 1958 Porsche-356).
She was a first cousin of Filipino socialite Isabel Preysler, and a first cousin, once removed, of Spanish singer Enrique Iglesias, who is Isabel's son. Terry's maternal grandfather, José Salgado Arrastia, was also Isabel's maternal grandfather.

She was married to Dennis Flattery. She died on March 19, 1998 in Los Angeles.