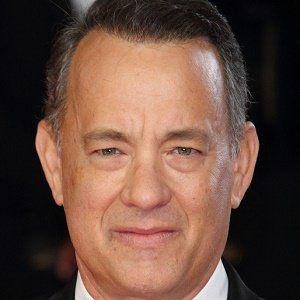 Tom is alive and kicking and is currently 65 years old.
Please ignore rumors and hoaxes.
If you have any unfortunate news that this page should be update with, please let us know using this .

Does Tom Hanks Have the coronavirus?

Tom Hanks has had the coronavirus (COVID-19) but now is recovered.

Thomas Jeffrey "Tom" Hanks is an American actor, comedian and filmmaker. He is known for his roles in Splash, Big (1988), Turner & Hooch (1989), Philadelphia (1993), Forrest Gump (1994), Apollo 13 (1995), Saving Private Ryan, You've Got Mail (both 1998), The Green Mile (1999), Cast Away (2000), and The Da Vinci Code (2006), as well as for his voice work in the animated Toy Story series and The Polar Express (2004).
Hanks' films have grossed more than $4.5 billion at U.S. and Canadian box offices and more than $9.0 billion worldwide, making him the fourth highest-grossing actor in North America. Hanks has been nominated for numerous awards during his career. He won a Golden Globe Award and an Academy Award for Best Actor for his role in Philadelphia (1993), as well as a Golden Globe, an Academy Award, a Screen Actors Guild Award, and a People's Choice Award for Best Actor for Forrest Gump (1994). In 1995, Hanks became one of only two actors who won the Academy Award for Best Actor in consecutive years, with Spencer Tracy being the other.

In 2004, he received the Stanley Kubrick Britannia Award for Excellence in Film from the British Academy of Film and Television Arts (BAFTA). In 2014, he received a Kennedy Center Honor, and in 2016, he received a Presidential Medal of Freedom from President Barack Obama, as well as the French Legion of Honor.
Hanks was married to American actress Samantha Lewes from 1978. They had one son, actor Colin Hanks (born 1977), and one daughter, Elizabeth Hanks (born 1982).
In 1981, Hanks met actress Rita Wilson on the set of TV comedy Bosom Buddies (1980–1982). They were reunited in 1985 on the set of Volunteers. Hanks and Samantha Lewes divorced in 1987.
Hanks married Wilson in 1988. They have two sons. The oldest, Chester Marlon "Chet" Hanks, had a minor role as a student in Indiana Jones and the Kingdom of the Crystal Skull and released a rap song in 2011. Their youngest, Truman Theodore, was born in 1995.
On October 7, 2013, on The Late Show with David Letterman, Hanks announced that he has Type 2 diabetes.