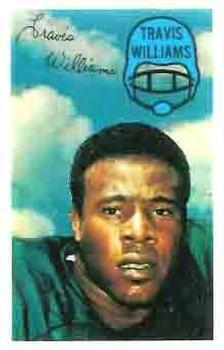 Travis passed away on February 17, 1991 at the age of 45 in Martinez, California. Travis's cause of death was heart failure.

Travis Williams (January 14, 1946 – February 17, 1991) was an American football player for the Green Bay Packers. Williams attended Harry Ells High School, Contra Costa College and Arizona State University, before being selected in the 1967 NFL Draft at the insistence of Packers' coach Vince Lombardi. He returned four kickoffs for touchdowns in his rookie season in 1967, setting an NFL record. Among the returns were two in one quarter against the Cleveland Browns to set another league record. He also set the record for single-season kickoff return average with 41.06 yards, while playing four seasons with the Packers and two with the Los Angeles Rams, before a knee injury ended his career prematurely.