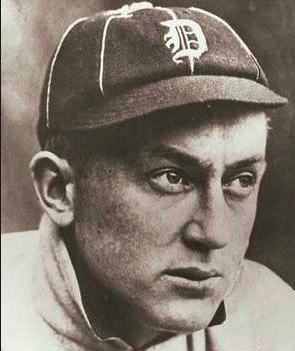 Tyrus Raymond "Ty" Cobb, nicknamed "The Georgia Peach", was an American Major League Baseball outfielder. He was born in rural Narrows, Georgia. Cobb spent 22 seasons with the Detroit Tigers, the last six as the team's player-manager, and finished his career with the Philadelphia Athletics. In 1936 Cobb received the most votes of any player on the inaugural Baseball Hall of Fame ballot, receiving 222 out of a possible 226 votes. In 1999, editors at The Sporting News ranked Ty Cobb 3rd on their list of "Baseball's 100 Greatest Players".