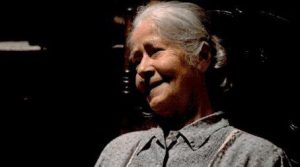 Vasiliki passed away on February 9, 1973 at the age of 89 in The Bronx,New York. Vasiliki's cause of death was natural causes.

Vasiliki Maliaros (Greek: Βασιλική Μαλλιαρού; October 16, 1883 in Athens, Greece – February 9, 1973 in The Bronx, New York City, New York, USA) was a Greek actress who only appeared in one memorable acting role in The Exorcist as Father Karras' Mother. She was discovered by William Friedkin in a New York Greek restaurant. She died at the age of 89 of natural causes.