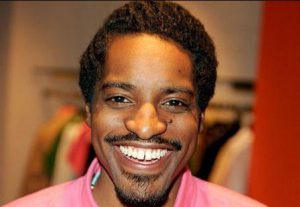 André is alive and kicking and is currently 46 years old.
Please ignore rumors and hoaxes.
If you have any unfortunate news that this page should be update with, please let us know using this .

Does André Benjamin Have the coronavirus?

André Lauren Benjamin, better known by his stage name André 3000, is an American rapper, singer-songwriter, multi-instrumentalist, record producer and actor, best known for being part of hip hop duo Outkast alongside fellow rapper Big Boi. As an actor, Benjamin has made appearances in a number of TV series and films, including Families, The Shield, Be Cool, Revolver, Semi-Pro, Four Brothers, and the leading role of Jimi Hendrix in All Is by My Side.
In addition to music and acting, Benjamin has also been an active entrepreneur. In the spring of 2008, he launched a clothing line called Benjamin Bixby. He has also been an advocate for animal rights. He is also known for his work on the Cartoon Network animated series Class of 3000.

Benjamin returned to rapping in 2007, after a hiatus from the genre. Appearing on various remixes, including: "Walk It Out", "Throw Some D's", "You" and Jay-Z's "30 Something." His contributions to original songs included UGK's "International Players Anthem", Devin the Dude's "What a Job", Fonzworth Bentley's "Everybody", and with Big Boi and Raekwon on "Royal Flush". Benjamin worked with Q-Tip in the song "BE BRAVE" that was supposed to be released on Q-Tip's album The Renaissance. He also appeared on John Legend's album Evolver, on the track "Green Light", which was released on October 28, 2008.
Prior to the release, Benjamin commented: "It's going to be a surprise for a lot of John Legend fans because it is a lot more upbeat than John is—than people think John is. I was actually happy to hear it. This is a cool John Legend song." Benjamin has stated that he plans on recording a solo rap album and that the response to his remixes is part of the motivation for it. In 2010, he was featured on Ciara's remix for her single "Ride", from the album Basic Instinct and on the remix to Chris Brown's "Deuces".
In 2004, alongside Alicia Silverstone, Benjamin was voted by People for the Ethical Treatment of Animals (PETA) to be the 'World's Sexiest Vegetarian Celebrity'. He is a childhood friend of Fonzworth Bentley. Benjamin also has a son named Seven Sirius Benjamin (born November 18, 1997) with R&B singer Erykah Badu. Benjamin was arrested in Henry County, Georgia in March 2009 after being caught driving his 2007 Porsche 911 109 mph in a 65 mph speed zone.