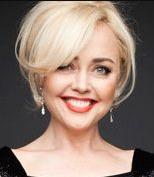 Angeline is alive and kicking and is currently 53 years old.
Please ignore rumors and hoaxes.
If you have any unfortunate news that this page should be update with, please let us know using this .

Does Angeline Ball Have the coronavirus?

Angeline Ball (born 1969) is an Irish actress who currently resides in London, England. She is a trained dancer in ballet, tap and modern dance. Her breakthrough role came in 1991 when she starred alongside Maria Doyle Kennedy and Bronagh Gallagher as backing singer Imelda Quirke in Alan Parker's The Commitments. Since then she has appeared in various films and television series both in Ireland and in America. Most notably, she played Vada's mother in My Girl 2 for which she sang a rendition of Charlie Chaplin's "Smile". She worked with Alan Parker again when she sang backing vocals for the Evita soundtrack album. Ian La Frenais and Dick Clement wrote the short-lived 1993 TV series Over the Rainbow for her. She also wrote all the music for Over the Rainbow.