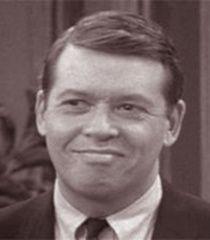 Bill Idelson (August 21, 1919 – December 31, 2007) was an actor and scriptwriter best known for his teenage role as Rush Gook on the radio comedy Vic and Sade and his later, recurring television role as Herman Glimscher on The Dick Van Dyke Show in the 1960s, before making a distinguished third career as a television writer, director and producer. Idelson was born in Forest Park, Illinois. His parents were Russian immigrants. He was also the father of television writer/actress Ellen Idelson.