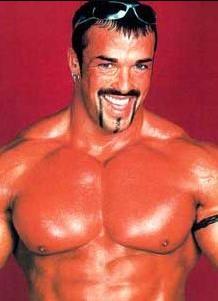 Buff is alive and kicking and is currently 52 years old.
Please ignore rumors and hoaxes.
If you have any unfortunate news that this page should be update with, please let us know using this .

Marcus Alexander Bagwell (born January 10, 1970) is an American professional wrestler and actor, better known by his ring name, Buff Bagwell. He is best known for his tenure with World Championship Wrestling between 1991 and 2001, where he was a five time World Tag Team Champion. Bagwell was married to his third wife, Judy in 2001. He was also featured on a reality show called Gigolos, which he was embracing his lifestyle as a male escort.
On April 23, 2012, Bagwell was seriously injured in a car accident. According to the Woodstock police report, Bagwell called his wife at 1:35 PM to tell her that he was about to suffer a seizure while driving. He was subsequently taken to WellStar Kennestone Hospital in his hometown of Marietta, Georgia, where he was placed in the hospital's intensive care unit after suffering broken bones in his neck, face and jaw. On April 24, fellow WCW alumnus and former tag team partner Scott Norton released a statement via Twitter to confirm that Bagwell was going to be all right.

On April 25, Universal Championship Wrestling performer and Bagwell's brother John released a statement to confirm that Bagwell's condition was improving, but that he still required breathing and feeding tubes and would undergo surgery once the swelling in his face and neck subsided. On April 28, Bagwell's mother Judy revealed to TMZ that he had been taken off the breathing tube, was able to eat solid foods, and was able to talk. Fellow WCW alumni Sting, the Steiner Brothers, and Diamond Dallas Page have also kept in contact with Bagwell since his crash.
On May 3, Universal Championship Wrestling announced via Twitter that Bagwell was able to walk again, but still had a tingling sensation in his arms and hands. UCW also stated that he had four plates surgically inserted in his face and that his jaw was wired shut after surgery.