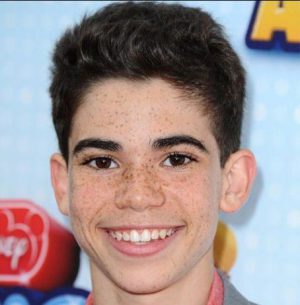 Cameron passed away on July 7, 2019 at the age of 20 in Los Angeles, California, USA. Cameron's cause of death was an ongoing medical condition.

Cameron Boyce is an American teen actor best known for his roles in the feature films Mirrors, Eagle Eye, Descendants, Grown Ups, and Grown Ups 2, as well as for his starring roles as Luke Ross on the Disney Channel comedy series Jessie and as Conor on the Disney XD series Gamer's Guide to Pretty Much Everything.
In May 2008, Boyce made his television debut on the Panic! at the Disco music video, "That Green Gentleman (Things Have Changed)", appearing as a kid version of the guitarist Ryan Ross. Then, in July, he appeared in a recurring role, Michael "Stone" Cates Jr., on the nighttime soap opera General Hospital: Night Shift. In August of that year, he made his feature film debut with a co-starring role in the horror film Mirrors, as well as appearing in the mystery-thriller film Eagle Eye that fall.

In June 2010, Boyce co-starred as Keith Feder, the spoiled son of Adam Sandler's character, in the comedy film Grown Ups, and appeared later that same year showing off his dance skills on the web series. The Legion of Extraordinary Dancers.
In April 2011, Boyce made a guest appearance on the Disney Channel series Good Luck Charlie and later that month he was one of the featured dancers in a Royal Wedding tribute on ABC's Dancing with the Stars. In June 2011, he had a small role as one of Judy's classmates in the family comedy film Judy Moody and the Not Bummer Summer and in August, he was one of the featured dancers on the Disney Channel series Shake It Up.
In September 2011, Boyce was cast in a co-starring role on the Disney Channel comedy series Jessie in the role of Luke Ross. During pre-production of the show, the role of Luke was originally intended to be a boy named Hiro adopted from Korea, but casting directors were impressed with Boyce during the audition process, and ultimately decided to recreate the role specifically for him.