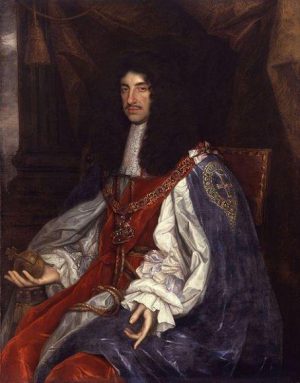 Charles passed away on February 6, 1685 at the age of 54 in Palace of Whitehall, London, England.

Charles II of England Birthday and Date of Death

Charles II of England's father, Charles I of England, died on January 30, 1649 as he was 48 years old. His cause of death was executed.

Is Charles II of England's mother, Henrietta Maria of France, dead or alive?

Charles II of England's mother, Henrietta Maria of France, died on September 10, 1669 as she was 59 years old.

Charles II was monarch of the three kingdoms of England, Scotland, and Ireland.
Charles was one of the most popular and beloved kings of England, known as the Merry Monarch, in reference to both the liveliness and hedonism of his court and the general relief at the return to normality after over a decade of rule by Cromwell and the Puritans. Charles's wife, Catherine of Braganza, bore no live children, but Charles acknowledged at least twelve illegitimate children by various mistresses.

Charles suffered a sudden apoplectic fit on the morning of 2 February 1685, and died aged 54 at 11:45 am four days later at Whitehall Palace. The suddenness of his illness and death led to suspicion of poison in the minds of many, including one of the royal doctors; however, a more modern medical analysis has held that the symptoms of his final illness are similar to those of uraemia (a clinical syndrome due to kidney dysfunction). In the days between his collapse and his death, Charles endured a variety of torturous treatments including bloodletting, purging and cupping in hopes of effecting a recovery.
On his deathbed Charles asked his brother, James, to look after his mistresses: "be well to Portsmouth, and let not poor Nelly starve". He told his courtiers, "I am sorry, gentlemen, for being such a time a-dying", and expressed regret at his treatment of his wife. On the last evening of his life he was received into the Catholic Church in the presence of Father John Huddleston, though the extent to which he was fully conscious or committed, and with whom the idea originated, is unclear. He was buried in Westminster Abbey "without any manner of pomp" on 14 February.