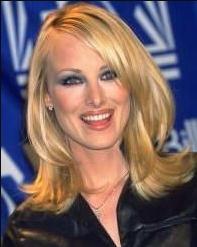 Chynna is alive and kicking and is currently 54 years old.
Please ignore rumors and hoaxes.
If you have any unfortunate news that this page should be update with, please let us know using this .

Does Chynna Phillips Have the coronavirus?

Chynna Phillips's father, John Phillips, died on March 18, 2001 as he was 65 years old. His cause of death was heart failure.

Chynna Phillips's mother, Michelle Phillips, is still alive and kicking at the age of 77. She is American and has had a career as a singer, actress, songwriter.

Chynna Gilliam Phillips is an American singer and actress, better known for being a member of pop girl group Wilson Phillips. She is also the daughter of The Mamas & the Papas band members John and Michelle Phillips, and the half-sister of Mackenzie Phillips and Bijou Phillips.
Phillips met actor William Baldwin of the acting Baldwin family in 1991 and has been married to him since 1995. The couple have three children.

In September 2009 Chynna's half-sister, Mackenzie Phillips, alleged in her memoirs that she [Mackenzie] and her father had a "consensual" ten-year incestuous relationship. While both Geneviève Waïte (John's wife at the time, and mother of Bijou Phillips), and Michelle Phillips, John's second wife (mother of Chynna Phillips) told the media that they did not believe her claims, Chynna said she believed Mackenzie.
On February 12, 2010, Phillips was treated for anxiety. In a statement made on February 27, her manager Lizzie Grubman said, "After successfully completing her in-patient treatment for anxiety, Chynna Phillips has happily returned home to celebrate her daughter's birthday with her family." Grubman said Phillips was "happy to be home with her family. She is in great spirits."