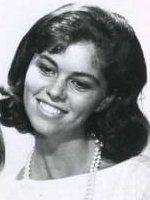 Claudia passed away on February 16, 2001 at the age of 56 in Reno, Nevada. Claudia's cause of death was breast cancer.

Claudia Martin was an American actress who was born on March 16, 1944.
Claudia Martin was the daughter of Dean Martin and his first wife, Betty MacDonald. One of seven children, she was born in Ridley Park, PA, but spent her childhood in southern California. She did follow her father into show business, appearing on such television programs as The Donna Reed Show (1958) and My Three Sons (1960).

She also appeared in a few films. She had a daughter, Jesse, with the late Kiel Martin, a star on the television series, Hill Street Blues (1981). From 1978 until her death in 2001, she and her husband, Jim Roberts, lived in Reno where they ran a printing business.
Her father passed away in 1995. She later married Jim Roberts and moved to Reno, Nevada, where they opened up a successful printing business. Claudia Martin passed away from breast cancer in 2001, at the age of 56.