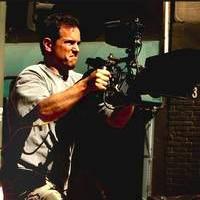 Born in California, David grew up in Milwaukee, Wisconsin, and attended Rufus King High School. He became interested in movies at an early age, making stop-motion animated films in his basement when he was twelve. He attended the New York University Tisch School of the Arts film school from 1985-1989; winning awards for cinematography and becoming interested in Steadicam. He bought a Steadicam in 1988 and has been working as a Camera Operator ever since.He lives in Hollywood with his unbelievably fantastic wife, Liz Vassey.