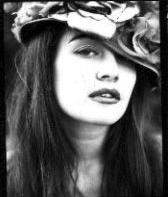 Demri passed away on October 29, 1996 at the age of 27 in Evergreen Hospital in Kirkland, Washington, USA. Demri's cause of death was inflammation of the heart caused by a heroin overdose.

Demri Parrott was an American artist who was born on February 22, 1969. Very little is known of Demri Parrott, except that she was practically worshiped by her fiancé, Layne Staley. Rare pictures show her to be dark-featured and pretty, with long black hair and dark eyes.
It is believed that Layne met Demri sometime in the 80's or early 1990, as she is thanked in the liner notes of Facelift, which was released 8/90. She is not, as is widely believed, the woman on it's cover. Most of her friends described her as kind, peaceful and artistic. They fail to mention, however, her dependency on heroin and whether or not she became hooked on the drug before or after she met Layne.

Layne Staley and Demri Parrott were, according to close friends and bandmates, described as perfect for each other and the term "soulmates" has been used more than once to define their relationship. However, in the years that followed Dirt's success, Layne and Demri drifted apart. Though the two were engaged between the years of 1992-1994, the engagement broke apart sometime in '93 or '94.
Sadly, on October 29th, 1996, Demri passed away due to an inflammation of the heart caused by a heroin overdose. She did not overdose, as is the popular belief, rather, her heart simply grew too big for her body. Many believe this was the final nail in the coffin for the already suffering Layne, who was fighting his own losing battle with an addiction.