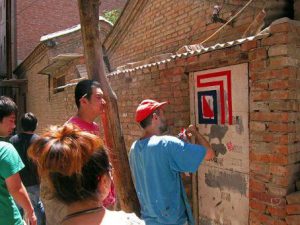 Eltono is alive and kicking.
Please ignore rumors and hoaxes.
If you have any unfortunate news that this page should be update with, please let us know using this .

Eltono is a French artist born in the suburbs of Paris in 1975. His work is mostly influenced by his graffiti background. He started painting around 1989 in his neighborhood mostly on train tracks and highway walls. "Eltono focused mainly on the railway lines to the northwest of the city, painting in the traditional silver and black, block letter Parisian style." He lived in Madrid from 1999 to 2010 (where he got his pseudonym), then in Beijing from 2010 to 2014 and since 2014 lives in the south of France. In 1999, while living in Madrid, he started painting abstract symbols with tape and acrylic paint. "It was then that he developed the colorful geometric box patterns for which he is now known." "As Eltono himself suggested, his move away from traditional graffiti was produced so as to find a harmony with both the material and the social body of the city (integrating both its architectonic and societal elements in a more consensual manner)." "Eltono also rejects conventional letterforms in favor of a minimalism device with which to negotiate space."