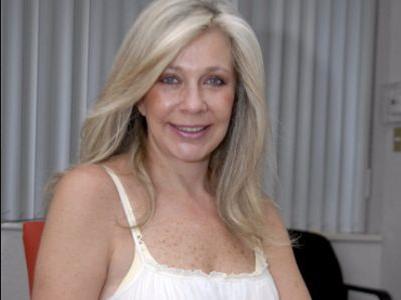 Ernestina is alive and kicking and is currently 61 years old.
Please ignore rumors and hoaxes.
If you have any unfortunate news that this page should be update with, please let us know using this .

Does Ernestina Sodi Have the coronavirus?

Maria Ernestina Leopoldina Amada Agueda Cristina Clementina Sodi Miranda (born July 24, 1960 in Mexico City, Distrito Federal, Mexico), known professionally as Ernestina Sodi, is a Mexican art historian, writer, journalist and former model who became famous when she was chosen as Miss Mexico City in 1977.
Ernestina Sodi Miranda is the third of the daughters of the second marriage of Yolanda Miranda Mange and Mexican scientist and criminologist Ernesto Sodi Pallares. Her grandfather was Demetrio Sodi Guergue, the lawyer who defended Jose de León Toral. She has sisters, Laura Zapata (from the first marriage of her mother) Federica, Gabriela and Thalía Sodi. She attended Thomas Alva Edison, the primary school located in the colony Santa Maria La Ribera, in the street of Salvador Diaz Mirón in front of its address known as the House of the Dogs. She is the mother of model and actress Camila González Sodi, known as Camila Sodi, her second daughter is Marina, Both daughters of a lawyer named Fernando González Parra, who divorced after suffering physical and psychological violence on his part. She planned to remarry on May 28, 2011 with businessman Mauricio Camps, but his nuptial plans were frustrated, since one day before the wedding, her mother, Yolanda Miranda, died of an infarct. Even so at the funeral of his late mother, she married Camps, causing great controversy. Ernestina grew in a strong cultural rigor on the part of its father. She studied with her sisters Gabriela and Federica at the National Conservatory of Mexico. She is an intellectual of the art and the letters, licensed in History of the Art by the Institute of Superior Culture.

On the night of September 22, 2002, Ernestina Sodi was with her older sister, Laura Zapata. They were coming out of an essay on a play. When they were about to get into the car, the gang of kidnappers, "Los Tiras", first surprised Laura, who had already identified her as the sister of the millionaire Thalia. "Los Tiras" had no plans to kidnap Ernestina. Hearing the sister, "Los Tiras" knew that they would get more money by kidnapping the two sisters of La Bella, so beaten and frightened, they were transferred to a house that the kidnappers adapted to keep the women and where they remained locked, Blindfolded, While the kidnappers began negotiations with the Sodi family to demand their rescue. After 18 days, and not getting any response from the families of their victims, the kidnappers first released Laura Zapata. However, Ernestina Sodi remained captive for 16 more days, until her younger sister, Thalia, completed the required sum.
After the kidnapping When the sisters were released, Ernestina Sodi met with Manuel Avila Camacho at a meal with her and her family. The Sodi family believed that Laura had orchestrated everything about the kidnapping. Also when Laura Zapata wanted to ride his play Cautivas, where she ushered her ordeal, no one in her family supported and attended the theater to see her, not wanting to leave his name surfaced in the work.
From that crude moment, the Sodi dynasty broke. Many speculations came to light and all the media and shows focused on the relationship of Laura, Ernestina and Thalia. Laura manifested her "courage" to Thalía, because she did not understand that if she had so much money and being the wife of the tycoon Tommy Mottola, she did not want to pay her ransom. For her part, Ernestina had the idea that the whole kidnapping was a plan of Laura.
To date, Laura shows her disinterest in wanting to reconcile with her sisters and more when, in 2006, Ernestina immortalized in a book written by her the most difficult moments of captivity, including the sexual violence of which she was a victim. In this regard, Zapata stated that he was very sorry and embarrassed for his sister, who decided to reveal that she was sexually r*ped in her book Libranos del mal.
However, despite Laura's differences, Ernestina and Thalía always had a good relationship and always supported each other. The mother of all, Dona Yolanda Miranda, has tried to reunite her daughters, but Laura always evades that possibility. In November 2008, Gabriela Sodi, another sister, came to the fore and expressed her estrangement from her sisters Thalía and Ernestina and even her mother Yolanda, implying that the conflict was not only with Laura, but with most of them. The sisters Sodi (with the exception of Federica Sodi, who always remained neutral in the situation that increasingly divided her sisters), because according to Gabriela's statements, her mother, Yolanda always focused more on Thalía, her career and being the representative than the rest of his daughters. It is even known that when Dona Yolanda married Ernesto Sodi, she sent Laura to live with her grandmother, Eva Mange, implying that she did not want her to live with her partner or to live with her sisters.